To help Bunnyx save Paris from super villains.

The Rabbit Miraculous is a magical jewel wielded by the superhero Bunnyx and an item featured in the animated series Miraculous: Tales of Ladybug & Cat Noir.

The Rabbit Miraculous is connected to the kwami Fluff and has been worn by many for years. Whenever Fluff goes inside, it transforms the holder into a rabbit-themed superhero. Its special weapon is a Umbrella, which can be utilized a weapon. Its special superpower is called Burrow, enables the holder to create portals that allow for travel in both space and time.

The jewel is currently owned by Alix Kubdel, a student in Miss Bustier's class at Collège Françoise Dupont in Paris, France.

The Rabbit Miraculous is silver with a circular pattern engraved on the cover when camouflaged. When opened, it reveals what appears to be a blue hologram of a woman holding a clock with the current time.

When Fluff inhabits it, it becomes blue with a white design in the center with five black circles, and on top it has a blue cone. In the middle of the cover, a clock face is seen; the hands on the clock face are arranged to look like the ears of a rabbit.

When worn by Marinette Dupain-Cheng, the Miraculous becomes pink, while when it is worn by Chloé Bourgeois it becomes yellow.

The Rabbit Miraculous provides its wielder with enhanced characteristics such as strength, speed, and agility. Its tool is an umbrella.

Its special superpower, Burrow, enables the holder to create a portal that leads into a pocket dimension known as the rabbit burrow. In this space, there are many portals, through which, anyone can view and travel to any point in the past, present, or future. A major difference between it and the power of the Snake Miraculous, is that the Rabbit allows it's user to go back to participate in events of the past, while not necessarily changing the future the user came from. However, unlike Snake Miraculous users, they can suffer from changes in the timeline as shown in "Cat Blanc". 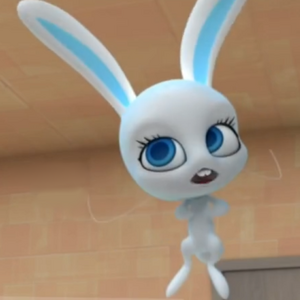 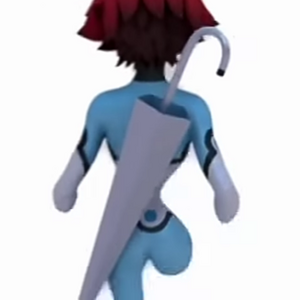 Umbrella
Add a photo to this gallery

Retrieved from "https://heroism.fandom.com/wiki/Rabbit_Miraculous?oldid=122916"
Community content is available under CC-BY-SA unless otherwise noted.