Mushroom World is a homeplanet located in the Grand Finale Galaxy where is neighbor with the Future Fun Land and Planet Plantaen. Here where played an important role in Nintendo games such as: Mario, Donkey Kong, Wario and Yoshi.

The planet consists several worlds with diverse landscapes, inhabited by several different specie peoples and strange faunas. There are also other faster ways to go in these worlds, for example the Warp Zone that is filled with pipes where shortcuts are for the characters to arrive fast without going from world to another. 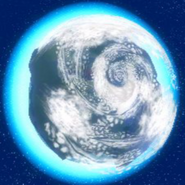 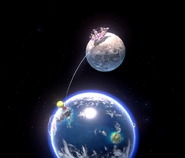 Super Mario Oddsey
Add a photo to this gallery
Retrieved from "https://heroism.fandom.com/wiki/Mushroom_World?oldid=55827"
Community content is available under CC-BY-SA unless otherwise noted.