The Merlin Circle is a mystical circular symbol that is the source of the Merlineans' preternatural powers and even named after the legendary wizard Merlin. It is primarily featured in the 2010 Disney fantasy movie The Sorcerer's Apprentice. There are 3 known good Merlinean spellcasters who used and practiced this magic Balthazar Blake and his cherished love interest Veronica Gorloisen, and Dave Stutler (also known as the Prime Merlinean).

The Merlin Circle is the source of a conjurer's powers, making it a perfect, sorcerous tool for mastering various spells. Being the primary source of one's magic, the Circle provides a sorcerer/sorceress near-limitless amount of Mana to help him/her further honing her skills in magic.

Constructing a Merlin Circle requires a significant amount of power and typically crafted on a solid ground. After channeling enough Mana from his/her surroundings, the sorcerer/sorceress focused the accumulated energy on the ground before releasing it as a circular, phosphorus green firewall around him/her. Afterwards, he/she completed the Circle by carving its alchemical symbols with focused heat converted from the excess energy.

Because of the considerable amount of Mana that drawn for the Circle's construction, any nearby electronics would be briefly malfunctions during its process.

In order for a sorcerer/sorceress-in-training to harness the magic within the Merlin Circle, he/she needs to wear a pair of pointy shoes and simply stand on one of the Circle's available domains. The former requirement is essential, as the design of aforementioned shoes enables Mana from the Circle to easily flow through his/her feet like wires/cables that connecting an electrical device with its power source. Using shoes with rubber lining will never work, as as they cannot conduct static.

There are 7 domains within the Merlin Circle:

Each domain has a source for its own spells.

Its opposite is the Morgana Star. 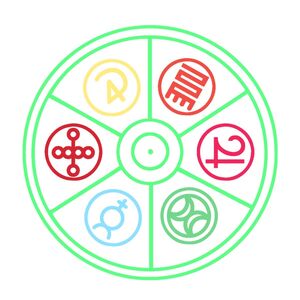 The Merlin Circle
Add a photo to this gallery

Retrieved from "https://heroism.fandom.com/wiki/Merlin_Circle?oldid=96731"
Community content is available under CC-BY-SA unless otherwise noted.