Third Planet of the Solar System

Heroes both real and fictional

Worlds both real and fictional

End evil across all the omniverse.

Good Realm, Heroic Location
Planet Earth (also as "the World" or "the Globe") is home of many heroes both real and fictional. The cultural perspective on Planet Earth varies by society and time period. While religious beliefs often include a creation belief as well as personification in the form of a deity, the exploration of the world has modified many of the perceptions of the planet, resulting in a viewpoint of a globally integrated ecosystem. Unlike the remainder of the planets in the Solar System, mankind didn't perceive the Earth as a planet until the sixteenth century.

Unlike the other planets in the Solar System, whose names in English share with an ancient Roman deity, the name "Earth" derives from the eighth century Anglo-Saxon word "Erda", which means "Ground" or "Soil". It became "Eorthe" later, and then "Erthe" in Middle English. These words are all cognates of Jörð, the name of the giantess of Norse myth. "Earth" was first used as the name of the sphere of the Earth in the early fifteenth century. The planet's name in Latin, used academically and scientifically in the West during the Renaissance, is the same as that of Terra Mater, the Roman goddess, which translates to English as Mother Earth.

The standard astronomical symbol of the Earth is a cross circumscribed by a circle. Said symbol is also known as "the wheel cross", "sun cross", "Odin's cross" or "Woden's cross". Although it has been used in various cultures for different purposes, it came to represent the compass points, earth and the land. Another version of the symbol is a cross on top of a circle; a stylized globus cruciger that was also used as an early astronomical symbol for the planet Earth.

Earth has often been personified as a deity, in particular a goddess. In many cultures the mother goddess is also portrayed as a fertility deity. To the Aztec, Earth was called Tonantzin ("our mother" in Nahuatl); to the Incas, Earth was called Pachamama ("mother earth" in Quechuan). The Chinese Earth goddess Houtu is similar to Gaia, the Greek goddess personifying the Earth. To Hindus it is called Bhūmi, the Goddess of Earth. (See also Navagraha.) In Norse mythology, the Earth giantess Jörð was the mother of Thor and the daughter of Annar. Ancient Egyptian mythology is different from that of other cultures because Earth, Geb, is male, and sky, Nut, is female.

In the ancient past there were varying levels of belief in a flat Earth, with the Mesopotamian culture portraying the world as a flat disk afloat in an ocean. The spherical form of the Earth was suggested by early Greek philosophers; a belief espoused by Pythagoras. By the Middle Ages (as evidenced by thinkers such as Thomas Aquinas) European belief in a spherical Earth was widespread.

The technological developments of the latter half of the 20th century are widely considered to have altered the public's perception of the Earth. Before space flight, the popular image of Earth was of a green world. Science fiction artist Frank R. Paul provided perhaps the first image of a cloudless blue planet (with sharply defined land masses) on the back cover of the July 1940 issue of Amazing Stories, a common depiction for several decades thereafter.

Earth was first photographed from space by Explorer 6 in 1959. Yuri Gagarin became the first human to view Earth from space in 1961. The crew of the Apollo 8 was the first to view an Earth-rise from lunar orbit in 1968. In 1972 the crew of the Apollo 17 produced The Blue Marble photograph of the planet Earth from cislunar space. This became an iconic image of the planet as a marble of cloud-swirled blue ocean broken by green-brown continents. NASA archivist Mike Gentry has speculated that The Blue Marble is the most widely distributed image in human history. Inspired by The Blue Marble poet-diplomat Abhay Kumar has penned an Earth Anthem describing the planet as a "Cosmic Blue Pearl". A photo taken of a distant Earth by Voyager 1 in 1990 inspired Carl Sagan to describe the planet as a "Pale Blue Dot."

Since the 1960s, Earth has also been described as a massive "Spaceship Earth," with a life support system that requires maintenance, or, in the Gaia hypothesis, as having a biosphere that forms one large organism.

Over the past two centuries a growing environmental movement has emerged that is concerned about humankind's effects on the Earth. The key issues of this socio-political movement are the conservation of natural resources, elimination of pollution, and the usage of land. Although diverse in interests and goals, environmentalists as a group tend to advocate sustainable management of resources and stewardship of the environment through changes in public policy and individual behavior. Of particular concern is the large-scale exploitation of non-renewable resources. Changes sought by the environmental movements are sometimes in conflict with commercial interests due to the additional costs associated with managing the environmental impact of those interests.

Earth a.k.a. Pokémon World in Pokémon 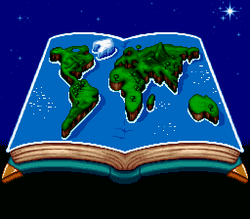 Earth in Smurf 2
Add a photo to this gallery
Retrieved from "https://heroism.fandom.com/wiki/Earth?oldid=88164"
Community content is available under CC-BY-SA unless otherwise noted.