To help Queen Bee save Paris from super villains.

Magical Weapon
The Bee Miraculous is a magical jewel wielded by the superhero Queen Bee and an item featured in the animated series Miraculous: Tales of Ladybug & Cat Noir.

The Bee Miraculous is connected to the kwami Pollen and has been worn by many for years. Whenever Pollen goes inside, it transforms the holder into a bee-themed superhero. Its special weapon is a spinning top, which can be utilized a weapon. Its special superpower is called Venom, giving the user the ability to immobilize any target.

The jewel was temporarily used by Chloé Bourgeois, a student in Miss Bustier's class at Collège Françoise Dupont in Paris, France. 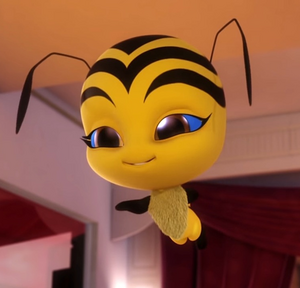 Spinning top
Add a photo to this gallery
Retrieved from "https://heroism.fandom.com/wiki/Bee_Miraculous?oldid=90071"
Community content is available under CC-BY-SA unless otherwise noted.