Joseph revealing himself to his brothers and forgiving them.

Squidward apologizing to SpongeBob for pulling an extremely nasty prank on him at the Krusty Krab.

Alan Parrish reconciling with his dad after finishing Jumanji.

Anastasia reconciling with Dimitri after discovering the truth and defeating Rasputin.

Drake and Josh reconciling from their foam finger argument.

Hiro Hamada reconciling with Gogo and his team in order to work together and stop Yokai.

Lilo reconciling with Nani after their argument about Lilo's future.

Angelica Pickles apologizing to her father, Drew for wrecking his home office and running away from the Rugrats episode, "Runaway Angelica".

Twilight Sparkle apologizing to Spike for blurting out his secret crush on Rarity.

Spike hugs Twilight and apologizes to her for being jealous of Owlowiscious, while Twilight apologizes in return for not being more sensitive earlier.

Trixie apologising to Twilight Sparkle for being so cruel and mean to her and her best friends.

Sunset Shimmer apologises to Twilight Sparkle, the other main six and the students of Canterlot High School of bullying everyone and becoming a demon and trying to take over the human world.

Discord apologising to Twilight Sparkle and her friends for working with Lord Tirek to conquer the world.

Gloriosa apologises to Celestia and Luna for anything she has done.

Pinkie Pie and Twilight Sparkle apologizing and reconciling after their earlier argument had taken too far before they could gather the Staff of Sacanas.

Glitter Drops reconciling with Tempest Shadow after she felt guilty for abandoned Tempest when they were little, they finally make amends. 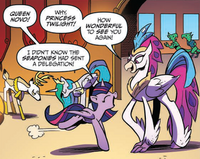 Queen Novo reconciling and gratefully thanks to Twilight Sparkle for brought Queen Novo and her fellow subjects out of hiding since the Storm King's defeat. She also seems to have forgiven Twilight for attempting to steal the pearl.

Amethyst and Pearl forgiving each other.

The Loud Sisters forgives Lincoln for a video.

Kuzco and Pacha reconciling at the llama meadow.

Makuu forgives Ono for accidental awakening him and other crocodiles from sleep.

Don Lino apologizes Lenny for his behavior, saying that he accepts him for who he is, whether he eats meat or not. 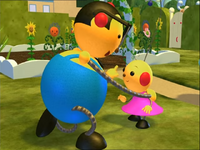 Percy Polie apologizing to his daughter, Zowie Polie about saying the 3-D word.

Buster Moon reconciling with Meena after hearing her sing and decides

Donner apologizing to Rudolph for trying to hide his nose.

Chuckie and Kimi reconciling at the Java Lava.

Kane apologizes to his brother The Undertaker for putting him in a vegetative state two years ago.

Earl Sinclair apologizing to his family for bringing the world to an end.

Ruby and Sapphire reconciling their relationship after Ruby apologizes to Sapphire for releasing her rage.

Merida apologizing to her mother Queen Elinor for their argument and breaking the spell.

Violet apologizes to Maya for her bullying and her cheating before she befriending with Maya. 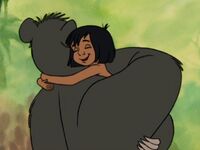 Baloo and Mowgli reconciling their friendship after celebrating their victory against Shere Khan.

Nemo apologizes to his father Marlin for saying he hated him.

Tommy and Dil sleep together and reconciling and Dil learns to share.

Stellaluna and the birds hug and reconcile.

Tai Kamiya and Matt Ishida reconciling for what they did and work together in order to reunite with the Digidestind.

Anakin Skywalker thanks his son Luke for saving him.

Fa Mulan reconciling with her father, Fa Zhou after she returns from war and bring him the sword of Shan Yu and the crest of The Emperor of China.

Riley Andersen and her parents reconciling after realizing that they have been miss Minnesota.

Ariel reconciling with her father, King Triton saying that she love him.

Kevin McCallister reconciling with his mother, after Kate has finally found Kevin in New York City on Christmas Eve.

Kate McCallister apologizes to her son, Kevin for her past actions towards him.

B'Elanna Torres making up with Joe Carey for what they did and working together on a fresh start.

Beast apologizes to Belle for accidentally scaring her away.

Stoick apologizes to Hiccup for disowning him, before the latter flew off with Toothless to face the Red Death.

Hegla apologize to Arnold for her harsh and selfish behavior that make him run away to find his parents.

An Yu forgives the PJ Masks for telling them go back to their world and not helping in getting rid of Night Ninja and his Ninjalinos.

Jimmy reconciles with his parents and apologizes for not listening to them earlier about not talking to strangers.

Elmo apologizes to Zoe for not sharing his blanket and hurting her feelings.

Eddy apologizes everyone, revealing his true shy and kind nature for the reason why he lied about his brother and why he behaved like a jerk throughout the series.

The Cirucs Bugs reconciles with Flik for accusing him about them being warriors. 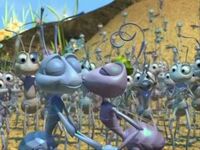 Princess Atta reconciles with Flik for a mistake of accusing him of lying to Circus Bugs as warriors and thanking him to help to defeat the grasshoppers.

Ranjan's father apologizes to Mowgli for being so harsh on him 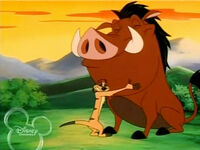 Timon and Pumbaa reconcilling each other.

The Justice Ducks forgiving Darkwing Duck after the defeat of the Fearsome Five.

Sir Ector apologizes Wart now named King Arthur for being too strict on him. 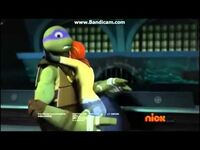 April forgives Donatello for accidentally mutating her father and hugs him.

Shrek's apology to Donkey before heading to Lord Farquaad's castle and stop the wedding.

Aladdin apologizing to Jasmine for lying to her about being a prince.

Wreck-It Ralph apologizes to Vanellope for wrecking her kart.

Simba hugging Timon and Pumbaa thanking them to helping him reclaim Pride Rock.

Bart apologize Homer for a jealousy that his father had a pig, and his father reconcile with his son for his mistakes and for running away.

The Springfield Citiziens reconcile with Homer after he and Bart saving the city by the bomb.

Kerchak's apology to Tarzan for his harsh attitude and disownment of Tarzan not being part of the gorilla family and finally accepts him as his adopted son before dying.

Dave Seville reconciling with Alvin, Simon and Theodore with the Chipmunks secretly escaping and telling Dave that they missed him so much.

Robin apologizes for splitting up with his friends 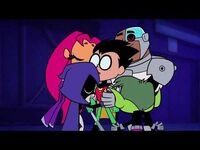 The denizens of Bird Island apologize to Red for their callous treatment towards him as well as not listening to him, after King Leonard and his Pigs steal their eggs and ruin their homes

Scamp apologize Tramp for running away from home for to be a wild dog and his father reconcile with his son that was is too thought on him.

Simba apologizing to Kovu for selfishly exiling him from Pride Land and for being overprotective towards his daughter Kiara.

Ariel apologizes to her daughter Melody for hiding her mermaid heritage from her.

Tony Stark and Steve Rogers are reconciling each other after he gave him his shield and they became partners again.

HBC executives apologizes to the Knights of Standards and Practices about using the curse word in the world.

The Grinch apologizes the citizens of Who-ville for stealing Christmas.

Dug apologizes to Carl Fredricksen and Carl accepts Dug to be his pet dog.

Stu and Drew Pickles reconciling after the adults have finally found the kids.

Walter Hobbs reconciles and apologizes to Buddy Hobbs for yelling at him.

Tod and Copper reconciling as they go their separate ways.

Joey Gladstone hugging his father Colonel Gladstone for inspiration for Joey's comedy work,
Add a photo to this gallery

Ratchet and Clank All 4 One Cutscenes Part 12
Captain Quark and Dr. Nefarious reconciling for their harsh treatment of each other in the past.

Aladdin Happy Ending HD - Aladdin cartoon -Disney aladdin -Cartoon for kid
Aladdin apologizing to Jasmine for lying to her about being a prince.

Taran And Eilonwy Reconcile
Taran and Eilonwy reconciling with each other after a brief argument.

Adventure Time - Flame Princess and Finn Moments "Bun Bun" CLIP
Finn apologize to Flame Princess when he lying to her for so long and they become friends again.

Brave 2012 Sad Ending - 2nd Sunrise
Merida apologies to her mother Queen Elinor for their argument, which breaks the spell.

A Family United Dino King Journey to Fire Mountain
Speckles apologizing to his son Junior for being too hard on him and expressing how proud he is of him.
Add a photo to this gallery
Retrieved from "https://heroism.fandom.com/wiki/Apologies,_Forgiveness_and_Reconcilements/Gallery?oldid=89954"
Community content is available under CC-BY-SA unless otherwise noted.